They Named Her Ruthie

How a dream led Spokane resident to adopt from Rescue4All 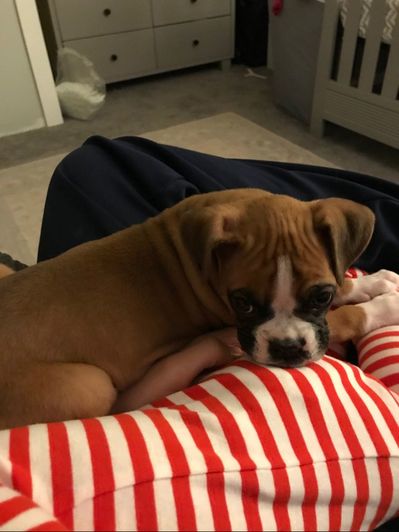 Ruthie after being adopted. Photo from Kari Grambo
Before she ever met the puppy or knew she existed, Kari Grambo knew she would be a part of her family. How could she possibly have known that she would adopt a tiny boxer puppy with a cleft lip and cleft palate?

It came to her in a dream.

A week before Rescue4All, a local dog rescue in Spokane, posted about the boxer puppy with a cleft lip and palate, Kari had a dream that she would adopt this dog from this rescue. She understands how crazy it sounds, but she holds true to the story.

She exclaimed to her husband, Isaac Grambo, the second she saw the photo of the puppy on Rescue4All’s website. After meeting the puppy, Kari knew she was meant to be a part of her family – all she had to do was persuade her husband that it would be a good fit.

He needed a bit of encouragement because, having a cleft lip himself, she thought he would be hesitant to have that constant reminder of his abnormality. She was right, Issac was hesitant, until he met and fell in love with the puppy as well.

They named her Ruthie. 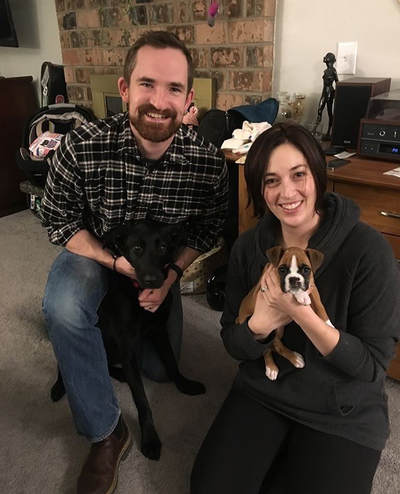 Kari, Isaac, Lily and Ruthie at home. Photo from Rescue4All Facebook
Kari and Isaac are new parents, but not just to Ruthie. They have an 8-month-old daughter and a 1 and a half old Shepard-lab mix, Lily.

​Both of their dogs came from Rescue4All and immediately became a part of the family. Which Kari believes is due largely in part to the relationship they have built with the rescue.

People have questioned Kari’s parenting style because she is raising a newborn in the same space as a boxer. She laughs at this and explains that her new puppy is teaching her daughter important life lessons.

​She believes that children need to be taught how to properly interact with animals. One of her biggest pet peeves is when animals are blamed for acting out because people do not know how to interact with them and treat them properly.
Kari is a huge advocate for boxers, pits and pit mixes because she has only had positive experiences with them. She believes that once people are acquainted with these types of dogs they are much less likely to be afraid of them.

“I’m certainly much less nervous about it because of my familiarity [with Pit bulls]” she said.

The Pit mix she had as a graduate student helped get her through hard times and took on many roles as a car buddy, running buddy and companion for lonely times. When asked if she was scared that Ruthie might hurt her daughter, Kari replied, “It was really more interesting to have people’s perception of what should be scaring me verses what actually does … Because Ruthie’s greatest desire and dream in life is to sit in your lap, forever.”

The Rescue4All rehabilitation program, that teaches dogs how to have healthy and trusting relationships, is proof that dogs are not born mean or angry. Dogs simply react to the way they are treated. Many of the dogs that Rescue4All works with are on their last chance before being euthanized because they are too violent or too hard to handle. With the right training and love from foster homes and volunteers these dogs are the perfect playmate for children, comfort for the elderly, or addition to any family.​
To hear more about Kari's dream and opinion on raising a Pitbull puppy with a newborn listen to the Underdogs4All podcast, below.
-Rachael Arand