Is a Raw Diet Right for Your Dog?

Man’s best friend deserves the best diet, right? These days, pet owners are torn on what “best diet” truly means. According to PetsWebMD, the raw diet debate started in 1993, when Australian veterinarian Ian Billinghurst suggested “extending those feeding practices to the family pet,” since “racing greyhounds and sled dogs have long eaten raw food diets.” Raw dog food diets are controversial, but its popularity is increasing. PetsWebMD writes that Billinghurst believed adult dogs would “thrive on an evolutionary diet based on what canines ate before they became domesticated…” He argued commercial pet foods were harmful to a dog’s health. One pet owner agreed, and said they noticed a change in their pet’s coat and breath almost immediately after starting a raw diet. However, many veterinarians, and the FDA, disagree. PetsWebMD asserts, “The risks of raw diets have been documented in several studies published in veterinary journals.”

Some potential pros and cons regarding raw diet for dogs (above). Credit Ari Agnew
A raw diet typically consists of “muscle meat (often still on the bone), bones (either whole or ground), organ meats (livers and kidneys), raw eggs, vegetables (broccoli, spinach, celery), apples or other fruit, and some dairy, such as yogurt.” One thing to consider when choosing a raw dog food diet is the cost. The cost varies depending on the ingredients used and how they are prepared. According to PetsWebMD, “For a 30-pound dog, one-day…costs about $2.50; others may range up to $5 a day.” In comparison, “A super-premium, commercial dry dog food costs about $1 [a day].”

Shannon Reed, a Rescue4All volunteer and raw diet advocate says, “dogs have a digestive tract that is more acidic and shorter than humans, and therefore do not have the same concerns about bacteria in raw meat.” One important thing to note is that raw diet is not for all dogs. Diana Bucco of PetMD says owners who are interested in raw diets “should talk to a professional rather than just feeding their dogs uncooked meat.”

Lisa M. Freeman, DVM, PhD, conducted a study evaluating raw dog food diets published in the Journal of the American Veterinary Association in 2001. She advises pet owners against a raw dog food diet, saying many dog owners are choosing raw diets “based on online myths and scare tactics about commercial pet food.” Her study looked at five raw diets, three with homemade food and two with commercially available food. According to PetsWebMD, All of raw diets had “nutritional deficiencies or excesses that could cause serious health problems when given long term.” Studies of raw pet food also have shown bacterial contamination.

A separate example of raw dog food diet bacterial contamination occurred when Raws for Paws recalled 4,000 pounds of its Ground Turkey Pet Food due to “possible Salmonella contamination after reported illnesses, including two children who have been infected with Salmonella Reading” (Food Safety News). The FDA also issued suggestions in 2004 against raw pet food.

Raw diet supporters fight back against this, saying, “the whole concern about bad bacteria is overblown…when people are feeding a raw diet, they know it is not sterile, and they are more careful about washing their hands” (PetsWebMD).
​
Reed feeds her animals raw because it is a “passion” of hers, and she believes “it is one of the best things we can do for our dogs health.” Below are some highlights from her interview.
Reed also shared a powerful story in support of raw diet for dogs based on an experience with Rescue4All. Read below for the story. 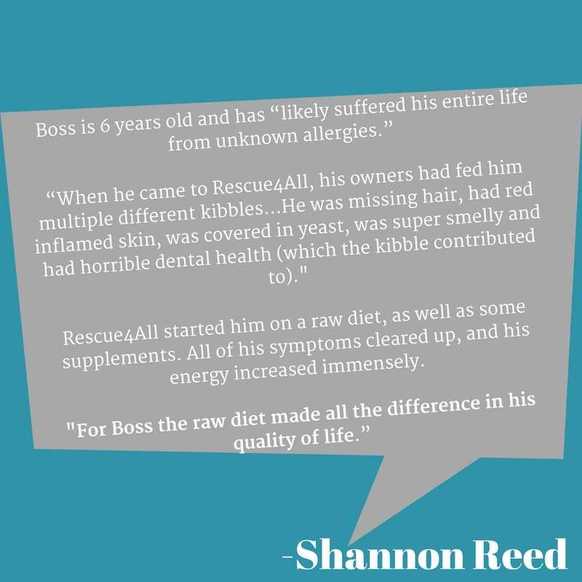 Credit: Shannon Reed
Vote whether you would start your dog on a raw diet below.
​
http://www.easypolls.net/poll.html?p=5abef199e4b0f7307b16a24b 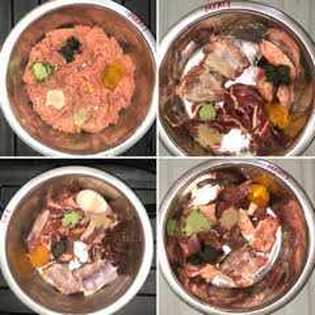