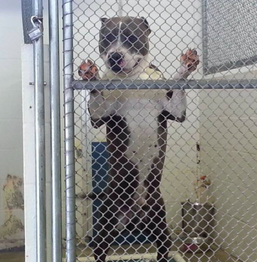 Daddy's first evaluation day at the Spokane animal shelter. Photo by Jamie McAtee.
​It was April 2014 when Jamie McAtee, founder of the non-profit organization Rescue4All, first laid eyes upon Daddy. While being held as police evidence at the local Spokane animal shelter, he was still wagging his tail in a cage. At this evaluation McAtee never suspected this pit bull would become Rescue4All’s bully breed ambassador and inevitably her best pal.
​
A few weeks later McAtee was visiting the shelter to evaluate some German Shepherds, and she once again laid eyes upon Daddy. Surprised he was still in the shelter after one month, one of the volunteers informed McAtee that the only reason he is alive is because they were too busy to euthanize him the night before. Sadly, that day would have been his last day, but not if McAtee had anything to do with it.
​
It is hard to imagine the treachery Daddy endured with his previous owner, especially when you see his friendly demeanor and loving temperament. A victim of abuse and terror for four years, Daddy was in the market for a good loving home. However, after a life of being exploited Daddy was not necessarily the best candidate for living in a foster home with fellow dogs and cats. 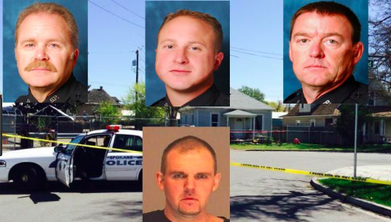 Jeremy Arnold, Daddy's previous convicted felon owner and the officers that shot him down. Photo from Spokesman- Review 2014.
Taught to hunt and kill by his previous owner, McAtee had to retrain Daddy in a number of aspects including to not hunt down the cats in the house. In addition to being trained to kill smaller animals, Daddy was subjected to illegal dog breeding processes where he was forced to reproduce and his litter was sold for profit. His original name was not Daddy, but that is who he is. He is the daddy to a number of puppies including those with his girlfriend Maya, who were all taken into new kind homes after being found. "A neighbor who went to the house to borrow a computer had found Fergerstrom’s body wrapped in a blanket and called police," reported Spokesman-Review. The neighbor immediately put the dogs in his van to ensure their safety.

To put into perspective the living conditions Daddy came from it is essential to consider who his owner was. Jeremy Arnold, a man who drowned his first wife in a lake and two years later stabbed his girlfriend and wrapped her in a carpet. McAtee explained that "a man capable of such horrific actions, it is impossible to imagine what he put Daddy through on a day to day basis." 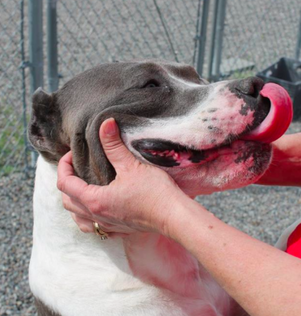 Daddy is known for his big smile. Photo by Jamie McAtee at the shelter.
“He was forced to do things that were against his friendly nature,” McAtee said about Daddy. Surrounded by drugs, violence, and sadistic games Daddy somehow came out of the situation still loving and with a personality constantly trying to win over the love of the people around him.

With every rescue dog there is a transitional period; adjusting the dog to the new surroundings, new people and new expected behaviors. According to McAtee a dog's behavior is largely dependent on their natural temperament. Just as people have inherent behaviors, dogs do as well. Regardless of the conditions they are subjected to, nature takes over nurture. Daddy has a kind hearted loving nature that enables him to interact well with children and people.

McAtee was thrilled when she saw that Daddy got along with Weston, McAtee's evaluation dog,  and her other dogs at home.  After one month of fostering Daddy, he swindled his way into McAtee’s heart and he was officially adopted. Daddy is alive and well because McAtee has such a large welcoming heart and cannot turn her back against any dog, the same characteristics of what Rescue4All embodies. From McAtee’s first evaluation of Daddy in 2014, she would not have predicted he would become the ambassador for her non-profit.
​He is constantly attending Rescue4All events, including some at Community Pint, Lone Wolf Harley Davidson, photoshoots for crates and to promote pit bull lovability.  Daddy is constantly changing minds, changing hearts and breaking preconceived stereotypes of what pit bulls are like. ​
-Christina Lalor