I Pledge Allegiance to the Animals

By Sinclair Nitz
Animal cruelty, neglect, and abuse are some of the concerns that Jamie McAtee had in the years leading up to the launch of Rescue4All in 2013. Rescue4All is a foster home based rescue organization for dogs.
​
The organization’s website states the Rescue4All Pledge of Animal Allegiance, which reads: “We pledge Allegiance to the animals, suffering from cruelty and neglect. We are a refuge that exists to help you, to save you. One caring safe haven, enduring, with love and Rescue4All.”

McAtee’s business of saving animals has helped over 100 dogs and has given numerous families a loving companion.

Rescue4All stemmed from a longtime love of animals that McAtee endured beginning as a young girl. She felt compassion for any animal that looked as if it was suffering, and made any effort that she could to try to save whatever furry, four-legged animal it was.

As McAtee grew older, she found success at a Mortgage company, but her love of animals never suffered. But, in 2009 the recession hit and McAtee was laid off. Although it took some time to come to terms with the fact that she was jobless, McAtee saw this as one door closing and another one opening—the beginning of her mission to help all animals.

This began later in 2009 at The Humane Society in Spokane, where she walked dogs and brought home ringworm kittens, in which she converted a room in her house to help foster and treat. Two months after bringing home her first four foster kittens, she was asked to take home a pit bull-lab mix puppy named Honey, who was not adapting well to the shelter environment. Four years later, Rescue4All came to be and McAtee’s hobby of helping animals in need became a lifestyle.
Rescue4All is a 501(c)(3) nonprofit dedicated to helping unwanted or unadoptable animals get accustomed to living their best lives and helping these animals find loving homes with individuals or families that accept their flaws. A 501(c)(3) nonprofit is one that has federal tax exemption allowed by the U.S. Internal Revenue Code. This type of nonprofit specifically applies to organizations that are considered public charities, private foundations, or private operating foundations, according to the Foundation Group.

McAtee partners with the staff at Veterinary Surgical Specialists to help keep medical costs down. Although she has help from the veterinarian, McAtee still has to raise large sums of money to make sure the animals she helps can get any medical treatment necessary. In fact, Rescue4All has never once been in debt. McAtee hosts events at breweries and other spots around the greater Spokane area that both help raise awareness for her cause and help raise money for her animals. This money that is raised is used to provide a grain-free diet for the animals and it is also used to cover the costs of spaying, neutering, vaccinating, micro-chipping, and deworming—whatever is necessary to be done before the animal is adoptable.

“The biggest part of maintaining the business is that Rescue4All is solely funded by the public and we cannot do what we do without people like you,” said McAtee.

Jamie McAtee is actively fundraising everyday, which has helped her business’s following quadruple in the past four years, but she hopes to keep expanding to help more and more animals get to safety.

“My goal is to secure property this year to have a place for more dogs and have the ability to create more community involvement with the dogs,” said McAtee.

To make this community involvement happen, McAtee is working on ways to fundraise for buying land and creating a physical location for people to come see the animals. An important aspect to her new goal is that she does not want a kennel-style environment.

“Finding a suitable structure for the animals is needed and I need an architectural plan,” said McAtee.

Her future plans are still in the works, but McAtee is doing all she can to get her expansion ready, and while doing this, she is also raising awareness and getting the community involved by a new book club.

Rescue4All changes animals’ lives and will keep doing so for as long as it can.
​ 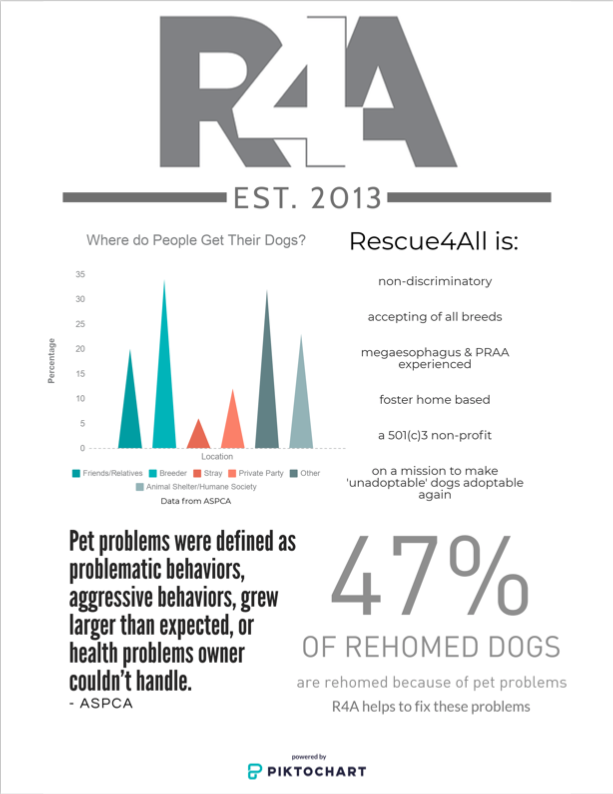 Infographic made by Sinclair Nitz