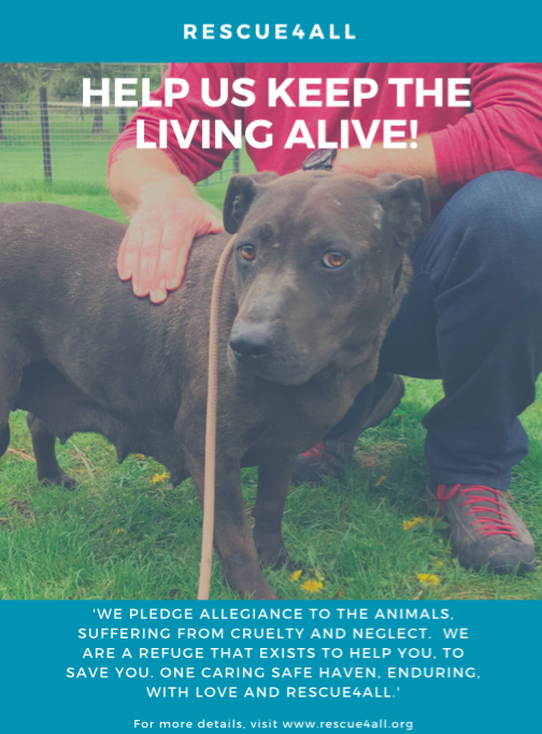 There’s a disconnect for people when they hear “puppy mill.” People often assume a puppy mill is a row of cages filled with puppies, but in rural counties such as Steven’s County in Washington state, puppy mills are very different.

Jamie McAtee, founder of Rescue4All, a non-profit organization helping bring abused animals to justice in Spokane county, had never been to one herself.

“I had never been actually in the thick of a puppy mill bust,” said McAtee. “I had never seen the frontline of it. I have always seen the dogs that come out of it, so in triage in a shelter helping them get vaccinations and stuff like that. It wasn’t something that myself or my team was prepared for.”
​
On May 3, 2017, a deputy for the Steven’s County Police Department contacted McAtee about a puppy mill involving an owner surrender and asked for her help.

According to Steven's County Sheriff Kendall Allen, this property has been an issue for years. "I think the folks started with a couple of dogs and it grew from there," he said. "They weren't capable of taking care of the animals, financially." Steven's County does not have an animal control program, so his office reached out to Rescue4All.

“She had asked us if we could take forty plus dogs that were abused and neglected and I had no idea,” McAtee said. “I think I’m brave enough and dumb enough to say yes to certain things and I trust the universe and whatever you believe in will support what we’re doing” 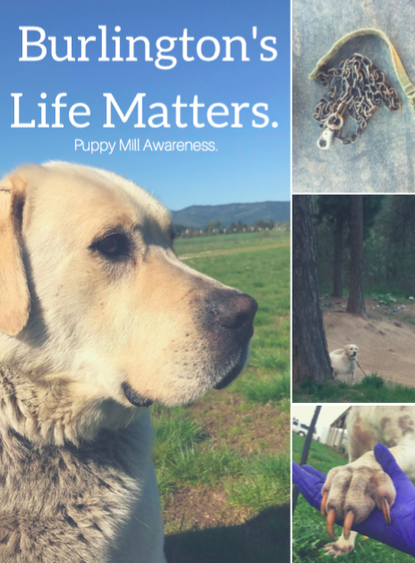 Burlington, one of the dogs rescued from the Steven's county puppy mill bust, is now living a life free of abuse with McAtee. Photos: Rescue4All
Once she pulled up to the property, it was unlike anything she had ever seen. McAtee described her first experience at this puppy mill in gory detail, describing it as “...dogs chained to trees. It is dogs with no shelter. They have no access to food. They are in squalor and hoarding.”

The owners of these animals, Thomas and Theresa Hostetler, had allowed these animals to live in filth, trash and junk, leaving them hungry and screaming. Love, one of the dogs from the mill, was one of the first animals she saw that had clearly experienced abuse and neglect.

“She had a 12 inch gash on her neck that was an open wound that you could see all the way into her shoulder with. She was just chained to this tree with no regard for her life” McAtee said.

The abuse was so extensive, she compared it to “...Sarah McLaughlin videos where you’re bawling your eyes out for these dogs.” McAtee and her team struggled gathering these animals as they were incredibly fearful of human touch.

“These dogs had never been touched with anything other than a fist. They had been beat every single day of their lives. They were terrified of humans,” McAtee said.

Regardless of the challenge that McAtee and her team faced, they could not give up. Most of these animals were in pens or chained to trees to keep them on the property. The team had to use bolt cutters to cut the rusty chains off the trees in order to complete the rescue.

The hardest part for McAtee was having to remain calm and respectful throughout the process of acquiring these dogs so the Hostetlers would not change their minds.
​
“We had to appeal to these people as if they were humans and that was one of the hardest things I’ve ever had to do,” McAtee said. “Just the sheer neglect. Skin issues, overgrown nails, defecating blood from massive infestation of parasites, hair loss, new wounds, old woods, three day old puppies that we got that were born and their mother was chained three feet too short to get to them. That’s where these poor dogs lived.”

This is not the first time the Steven’s County Sheriff’s Department had heard about this puppy mill.

Neighbors have been contacting police for 15 years complaining about this property, but according to Washington’s RCW, there was not enough evidence of abuse to arrest these people.

“You can have 25 breeding pairs of dogs. That’s 50 dogs that you can have legally in Washington and to make matters worse, puppies under the age of six months don’t count to that number” McAtee said. “That’s something I didn’t know about.”

McAtee and her team were only able to get 16 dogs the first night. When they came back, there were dogs missing. Because of these missing animals, the Sheriff’s Department decided to execute a search warrant on the property.

“The search warrant covered any place they could potentially hide an animal,” McAtee said. “During their search, they discovered intact spinal columns, skulls.”

This was enough to send the Hostetler’s to sixty days in jail.

“They were technically in the eyes of the law, first time offenders,” McAtee said.

Judge Monasmith of Stevens County gave them as harsh of a punishment as he could, which also includes banning them from owning an animal for two years. Despite this punishment, Theresa Hostetler found a way around the system.
​
“The nuance in that is that she somehow or another went and appealed to some medical person, and that doctor gave her a letter to have an emotional support animal,” McAtee said. “There’s a cat in my basement right now and she has to go back and there’s nothing I can do.”
McAtee acknowledges the difficulty of this situation for both her team and the dogs, but knew she did the right thing. McAtee felt that these animals “...knew we were there to help. Not all of them, but some of them.”

Although justice could only be served for most of the animals, McAtee did the best she could to raise awareness about animal abuse, puppy mills and what we can do to help. Since the puppy mill bust, McAtee is still fostering some of these animals in her own home. ​

​One such dog, Burlington, is still suffering from this trauma even today.

“He still gets nervous and he still freaks out but he implicitly trusts me and eventually, hopefully he’ll be able to go up for adoption,” McAtee said. “But right now he’s here with me. He’s normal here, he has a life here, he’s safe here.”

McAtee will continue fostering these animals and wants to bring justice to all animals in abusive situations but she cannot do it alone. She hopes the community will come together to stop animal abuse altogether and bring them to justice.

Although puppy mills are not extremely common, they still exist and are a problem that needs to continue being discussed. McAtee wants the public to be aware of people selling animals outside of grocery stores, or people that would rather meet in a public place instead of at their home.
​
If you are aware of anyone involved in a puppy mill or have any questions about puppy mills, please contact your local police department.
By Hailey Nader