What is Your Perception of Pit Bulls?
By Taylor Woods

​Listen to what these selected participants have to say about pit bulls. 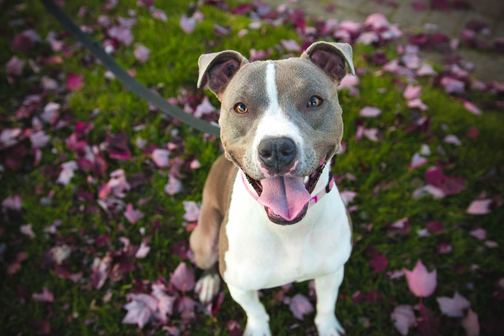 Photo by Justin Veenema on Unsplash
Would you be surprised to learn that pit bulls used to be among America's favorite breed?
​
During the two world wars, pit bulls were the symbol of the nation used in propaganda campaigns. The breed was the classic American icon, known as the loyal, everyday dog. Pit bulls appeared on Hollywood sets and became real war heroes, some earning presidential recognition.

​"I have always heard of good stories of [pit bulls] being really good when they are trained properly by the proper people," said Keith Ruiz-Hopper, a business student at Gonzaga University.

When a desire to have a big dog gained popularity, the pit bull was looked to as the breed that would offer protection. However, it also became the preferred guard dog for drug dealers and gangs. Bad owners led to badly trained pets, thus an unfortunate downward spiral for the breed ensued.

​"Dogs are trained, and thus, they are trained to either be great dogs or they could possibly be bad dogs. I know there are some pit bulls that are amazing pets but others that are dangerous to themselves as well as others. So it varies on how they were raised," said Allie Cosmos, a Gonzaga University student.

With a rise in dog fighting in the 1980's, despite its illegality, the pit bull was the breed of choice. In order to stop this, numerous humane movements joined with the media to put dog fighting on the front page time and time again, thus exploiting pit bulls. Ridiculous allegations paired with a petrified public led to the increase of dangerous individuals desiring the breed for their own.

Even now, the media is much more likely to post a story about an incident involving a pit bull than any other dog, when there's no data to prove they are more violent.

Author of Pit Bull: The Battle Over an American Icon Bronwen Dickey tells the story of how the once popular breed became demonized by society. While attitudes about pit bulls vary, misconceptions of the breed's history have clouded minds into the assumption that all pit bulls are dangerous and violent.

Dickey says that factors such as care and control of the dog were present in over 80 percent of severe incidents involving the breed, according to a study done by the American Veterinary Medical Association.
The term “pit bull” has become an umbrella category that has confused four different breeds as one: the American pit bull terrier, American Staffordshire terrier, American bully and Staffordshire bull terrier. All four share a different heritage, according to Dickey, which is a root of the problem.

"We’re basing things on what they look like and not necessarily what they are," said Dickey.

Rescue4All's mascot may as well be Daddy, founder Jamie McAtee's beloved pit bull. Daddy has become the highlight of every event, radiating with love through his gentle nature. His incredible story speak volumes to the heart of Rescue4All. McAtee says that once people have a chance to meet Daddy, he will "shatter your preconceived stereotypes and open your mind."

Dueling anecdotes paired with an American history paved with attitude switch-backs have led to controversial discussions about this misunderstood breed. It is not surprising that, when surveyed, a number of individuals offered contrasting opinions on the breed. With such an unusual history, filled with rumors as much as truths, pit bulls have generated passionate responses from the general public. ​
What is your perception of pit bulls?
Created with BuildQuizzes
By Taylor Woods