A Two-Way Street: How Rescue Dog​s Help Their Owners 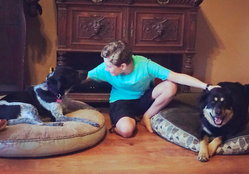 Micha and Willow (another rescue from Rescue4All) begin to get used to their new home together.

Micha is a dog who is scared of squirrels. She hides under a chair when strangers come to the house and won’t make eye contact with anyone unless they’ve spent at least ten days with her. She loves to cuddle with her owners and their children and loves a good tummy rub. Also, Micha weighs 120 pounds.
Tricia Berry and her family adopted Micha over three years ago through the dog rescue organization Rescue4All through a Google search about their preferred type of dog.
“We found Jamie through an online search,” Berry said. “We like big, black, and fluffy dogs. And Micha is about as big, black, and fluffy as you can get.” 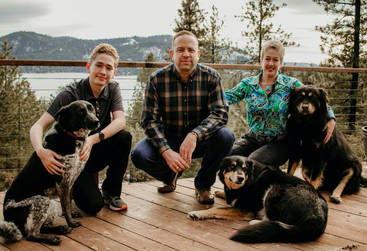 Micha (far right) pose with Tricia Berry and her family.
The Berry’s also have adopted Willow who, like Micha, was also abused as a puppy. Even though raising dogs that are mostly untrained and older who come from abusive homes or puppy mills can be a challenge, working with Rescue4All can be a rewarding experience.
Amanda Nelson recently adopted an 8-year-old black lab named George (nicknamed King George by Nelson’s daughters) after fostering him through Rescue4All for four months. Nelson found George after hearing about a puppy mill bust in Stevens County on the news and called to see how they could donate dog food to the rescued dogs. Nelson ended up doing much more than just donating after talking with Jamie McAtee, leader of Rescue4All, and seeing a photo of George on their Facebook page. 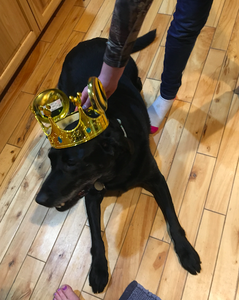 “We are just so happy with everything George has added to our family,” Nelson said. “Our yellow lab just loves him so much and my 10-year-old daughter and my 8-year-old daughter both love him, it has just been a great experience.”

But taking care of a rescue dog can come with its challenges. For Nelson, it was retraining George and dealing with his ears, which were so badly infected that they were worried he was going to lose his hearing.

“It’s been great. But it has been challenging at times because he was so sick with his ears when he first came to us that we had to help him with all his medical care so that now he can be all healed up,” Nelson said.

Even then, George had come from a puppy mill where manners and training were replaced by hunger and a drive for survival. 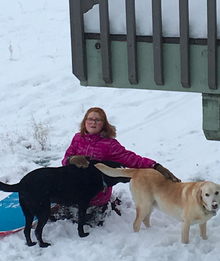 George plays with Champ (a rescue from the Tri-Cities area) and one of Nelson's daughters on a snowy day
“When he first came to us he had no control and would take food out of people’s hands and jump up on the counter all the time,” Nelson said. “But part of that was just from growing up hungry all the time and he didn’t know better.”

Berry empathizes with that experience, having to deal with Micha who held strangers at arm’s length and with much suspicion. Micha was being fostered by a home before Berry adopted her, and Micha’s aggressive and closed-off behavior caused enough tension that Jamie took Micha back to find her a better home.
“Micha is a behavior dog so she couldn’t go to a regular home because she wasn’t socialized as a puppy… They took her to the pound when she was seven months old and dumped her off, which is the worst thing you can do to a dog at the height of their socialization period,” Berry said. “Now she’s afraid of people or strangers that come in.”

Re-training Micha was a daunting task for Berry, but eventually she figured out how to deal with her, but not before some more struggles.

“We used to not be able to walk her on a leash, my husband is 6 feet 2 inches, 230 pounds, and he couldn’t walk her. She would walk him! But you figure out how to fix that behavior,” Berry said.

Berry used strict training techniques that she learned from The Dog Whisperer with Cesar Millan and from McAtee herself.

“At the other fosters, Micha would bark at and lunge at people, and the worst thing you can do with a dog in that state of mind is to console it and make it think it’s OK because it reinforces its behavior,” Berry said. “For me, taking what I learned from Jamie and from Cesar Millan’s videos, is that you need to be in front of the dog and telling it what you want from it and what your expectations are.”

Overall, both Berry and Nelson grew closer to their dogs, eventually breaking through their tough pasts.
“It took him a little while to realize that I wasn’t the torturer that was going to hurt his ears, but I was there to help him,” Nelson said. “But now you would assume that he has been with us his entire life. Now he sleeps in the bedroom with my girls and plays with them nicely. He has really added another dimension of love to our family.”

Berry has seen a similar turnaround.

“She’s never going to be happy-go-lucky, worry free kind of dog, but I never have to lock her up anymore because she understands what the expectations are of her,” Berry said. “She’s an amazing dog, she’s my baby.”
The rewards of helping these dogs do not just show up in their love for them, they’ve also taught their owners a thing or two in the process. 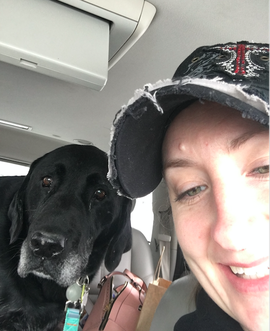 George and Amanda Nelson have developed a deep bond since his adoption, even though it has had its fair share of challenges along the way.
“Micha has helped me understand better how to deal with dogs with behavior problems. I’ve always had dogs straight from puppies, so I’ve never really had behavior dogs,” Berry said. “I used to always watch the dog whisperer with Cesar Millan – love that man’s program – and that really helped me understand what she needed.”

Now the dogs are a part of the family, and the lessons the dogs learn pale in comparison to the life lessons that taking care of the dog gives the adopters.

“[George] has helped give my kids a better understanding that everything comes with baggage, and that sometimes you have to put other’s needs before your own. But to see that helping George and accommodating his needs with his trauma-filled past has helped him get better is really rewarding for my kids,” Nelson said. “It’s a rewarding experience to know that we saved him from whatever his life would have been had the rescuers not gotten to him.”​
By SeanPrice