On a tepid Thursday afternoon, Jamie McAtee took four of her rescue dogs to Nine Mile Falls for some outdoor time. The wind pushed through trees and rustled the tall grass surrounding the well-worn walking path. Leash-free, most of the dogs cautiously broke away from McAtee, tentatively exploring the area around them. One dog, Hadley, quickly ran off ahead of all the others and was almost instantly out of sight. McAtee pursed her lips, whistled, let out a “Hadley!” and was immediately met with the sound of a panting dog running toward her.

This wasn’t always the McAtee everyone knows now. Over the past 15 years, McAtee’s life has taken a complete 180. McAtee was born and raised by a single mom in Montana. Growing up, McAtee always found herself acquiring stray animals – she would find dogs and cats and bring them home. From a young age, she was determined to be a vet.

In college, though, at the University of Great Falls, now the University of Providence, she was “smacked in the face with organic chemistry.” McAtee failed out and decided to make a change during her sophomore year of college.

“I kind of just revamped what I was going to do with my life,” McAtee said.

She soon changed her major to marketing and communications.

Out of college, McAtee moved to SandPoint, Idaho, where she got her first job at a multimillion dollar mortgage company.

“I thought life was all about making money and the brand of jeans you wore and what your hair looked like,” McAtee said of her first job. “I was super materialistic, and in that environment – the mortgage industry – everyone else is, too. It was about how expensive your car was.”

Then, her life changed out of the blue.

In 2008, due to the recession and crash of the stock market, McAtee lost her job and the company she worked for went bankrupt.

McAtee lost everything. To make matters even worse, like so many others, she wasn’t able to find work after the crash. When reflecting on this massive life change, McAtee speaks from a place of wisdom and optimism.

“The universe has this weird way of smiting you when you get too big for your britches,” McAtee said. “Slowly, I realized this stuff doesn’t matter.”

McAtee was unemployed for six months before she started volunteering at the Spokane Humane Society. During her first day at the shelter – in fact, the first hour she was there – the volunteer coordinator and the foster coordinator approached her and asked to if she would be willing foster four kittens with ringworm. If she wasn’t able to, the kittens would have to be euthanized.

“For the next six or nine months, I utilized the shelter every single day and walked dogs – I used it as my way to have a job,” McAtee said. “If no one was going to pay me, then this is what I was going to do to. I just didn’t want to be home and be this depressed person.”

From then on, McAtee’s job – and life – turned toward rescue.

“I’ve always had this gravitational pull toward dogs that are messed up,” McAtee said. “The universe brings them to me, because they know I won’t euthanize them – they know I’ll figure it out.”

After the kittens, McAtee brought home her first foster dog, Honey, in December of 2009. Honey was also her first behavior-medication dog. From then on, McAtee became the person the shelter would go to for dogs that needed training in manners, behavior, or had special medical needs.

McAtee soon noticed a problem that most people were ignoring: dogs with bite cases. People were simply unwilling to take them – or even evaluate them, according to McAtee.

She decided to step up.

McAtee had known for a while that she wanted to create a rescue of some kind.

In June of 2013, McAtee thought to herself, “I think I can do this.” By August of 2013, she had a business license.
​
​“I always knew what I wanted to call it,” McAtee said. “And so, Rescue4All ended up an adaptation from the Pledge of Allegiance – ‘and justice for all.’”​ 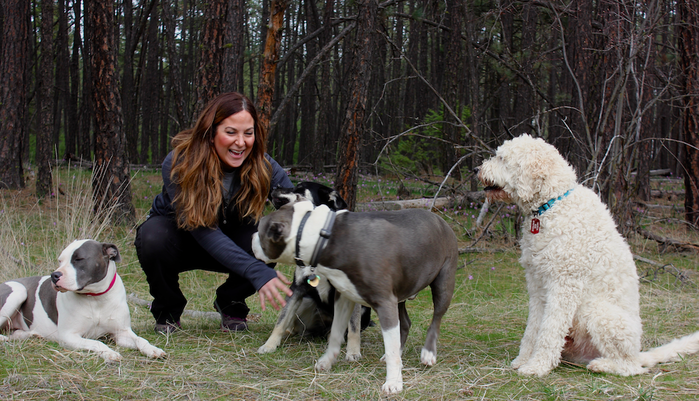 McAtee with some of her dogs; Brinkley, Hadley, Daddy, and Weston at Nine Mile Falls. Photo by Michael Liuzzi
Rescue4All sets itself apart from many shelters by not discriminating on which dogs they will take in.

In the beginning, McAtee had no idea how much Rescue4All would resonate with others. The first time she started telling family and friends about Rescue4All, she received $2,000 in donations.

“I never imagined that people would respond to this little dream of mine as much as they have,” McAtee said. “I think it’s an authenticity thing. People understand that where I’m coming from is not something for ego purposes or anything – it’s legitimately just to help these animals that no one else will take.”

McAtee’s work is completely selfless. She doesn’t do it for herself. Instead, it’s about creating community, connections, and safe, welcoming homes for rescues.

Shannon Reed, a friend of McAtee’s, and a volunteer for Rescue4All, echoed this sentiment.

"She’s a super genuine person who says it like it is,” Reed said. “And she’s following this passion of hers with gusto.” Reed first met McAtee two-and-a-half years ago at a dog training class. Six months into the relationship, she started volunteering with her.

“It’s pretty amazing what she’s been able to do in such a short time,” Reed said. “And I think the general public sees her and resonates with her because she is so genuine and so passionate and has followed this dream of hers. She keeps going and sometimes it’s really hard, but she always keeps doing it for the animals.”

Currently, McAtee has more than 20 dogs at her rescue. In the future, she hopes to grow to the point where she can establish a sanctuary for the dogs she takes in. But what’s paramount to her is staying true to her values and putting the spotlight on the dogs.
​
“I want people to emotionally connect with what we do,” McAtee said. “I want it to be an ‘our,’ not a ‘my.’"