The Road to Rescue
​By Abby Bordewick

The Road to Rescue
Written By: Abby Bordewick

​
After losing her job, Jamie McAtee began to fill her free time by volunteering at the Spokane Humane Society. What began as a hobby quickly turned into a passion. McAtee noticed how many dogs in the shelter system were out of options due to behavior or training issues and no other rescue organization were willing to take them. She thought to herself, “someone should do something,” and soon, that someone became her. McAtee founded Rescue4All, a foster home based rescue devoted to helping dogs that are ill, injured or have a serious medical or behavioral issue.

Rescue4All is doing what no other organization is and providing a second chance at a loving home to dogs that are often forgotten about. Each dog’s journey to Rescue4All may be different, but once there, they all receive the resources needed to succeed.

When the organization began, the main mission was to save dogs from shelters. This included dogs in danger of euthanasia, those deemed unadoptable or not doing well in the shelter system. Additionally, shelters do not treat dogs with medical issues, as it is not financially feasible. While many dogs still come from local shelters, Rescue4All has broadened its horizons.
​
McAtee has built a close relationship with Post Falls Animal Control. Many of the dogs they encounter have medical or behavioral issues and they know Rescue4All specializes in this realm. Post Fall Animal Control prefers to partner with Rescue4All because unlike shelters, the organization has a private adoption policy, meaning they can say no to potential adopters if the home is not an adequate fit. 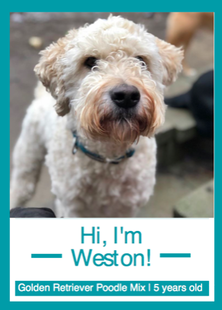 Rescue4All has experience with dogs that have a medical condition called megaesophagus, an enlargement of the esophagus, which is a muscular tube connecting the throat to the stomach. Most of the megaesphagus dogs currently at Rescue4All have been owner surrenders. “Owners will give up their dog to us if they can no longer provide sufficient care for it, we are happy to step in,” said McAtee.

Although most dogs come to Rescue4All from shelters, animal control centers or owner surrenders, this is not always the case. Rescue4All has become a well-known organization in the Spokane community. McAtee often receives, emails, phone calls and even the occasional tag on Facebook from people looking for help.
​
McAtee’s personal dog, Weston, evaluates potential dogs before Rescue4All can take them. “He is very balanced and the easiest dog to get along with, so if a dog doesn’t do well with Weston, we cant take it,” said McAtee. Once a dog gets a yes from Weston, they are placed into a foster home where they learn valuable life skills, receive training and socialization as they patiently wait for their forever home.
Unfortunately, McAtee does have to say no to some dogs. She is devoted to giving every dog in the program the attention and resources they need and is careful not to overcommit to more than she and the foster homes can handle. At any given time, Rescue4All can only have so many dogs with serious issues, “these dogs take time and they deserve an environment that will set them up for success,” noted McAtee. When she does have to say no, McAtee is sure to provide as many helpful resources as possible. She refers individuals to local trainers or invites them to the Rescue4All book club, a space for owners to learn how to be better for their dogs. Whichever road a dog may take to get there, ending up at Rescue4All is often a life saving destination. 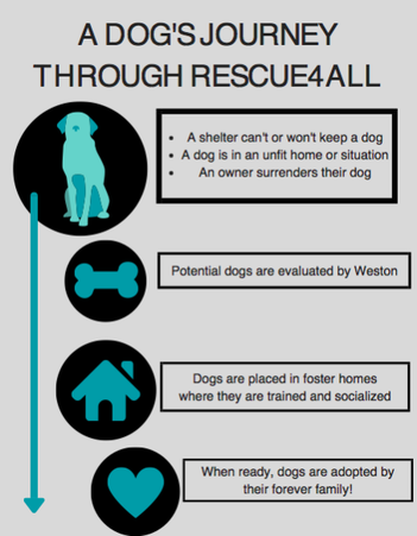 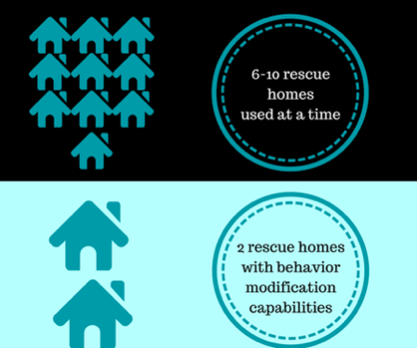